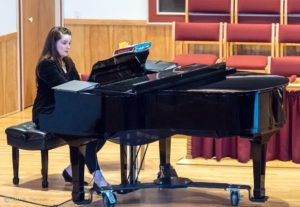 Originally from Summerside, PE, Andrea has lived in Charlottetown the past 10 years and has become an active member of the Island’s thriving music community.

Andrea holds a Bachelor of Music in piano, completing her studies with Dr. Frances Gray at the University of Prince Edward Island. As a vocalist, Andrea studied privately with Sung Ha Shin-Bouey and Suzanne Campbell. She is an alumni of the prestigious National Youth Choir of Canada, representing PEI in 2010 and 2012.

Along with her role as Music Director at Park Royal, Andrea runs private music studio focusing in piano, voice and theory. She is collaborative pianist with several Island choirs and musicians, including the Indian River Festival Chorus, Harmonia Girls’ Choir and soprano Shannon Scales. A founding member of Sirens, PEI’s nationally award-winning women’s choral ensemble, she is entering her seventh season singing with the group. In her free time, Andrea enjoys tending to her indoor garden and her little dog, Bernie.

Andrea is thrilled to share music with the congregation of Park Royal!

Coming Up at Park Royal

Worship Services
– Our worship services are live streamed on Sundays at 10:30am
– You can register to attend worship in the Sanctuary by calling or emailing the church office Monday through Thursday.

– You can access our live stream or recordings of past services on our YouTube Channel: Park Royal United Church

We are located at:
11 Christie Dr. Charlottetown, PE C1A 5W6